And another week has passed, for the stranger in a strange land.

Life has been busy, chaotic, and taxing. But I survive, as I always do, one day at a time.

There has been a lot of stress and anxiety – and that’s the sort of thing that scares me, because my dysphoria has been known before to manifest in ways that are not dissimilar. But despite that, this has been a week where I’ve felt a lot of pride in my trans identity.

And though some of that pride certainly comes from within, it’s really mostly attributable to my trans siblings around the world.

When you’re trans, some things that are often straightforward for others become a little more complicated. Things like taking a selfie, or sharing a photo from one’s childhood, for example. Now, I’m not suggesting that these things are always simple if you’re cis – because, of course, they aren’t, necessarily. Just that for a lot of trans people (again, not all) these things become a helluva lot more nuanced and complex.

There’s a whole bunch of reasons for that. Not least of which is the way that the world around us tries to appropriate everything about us – our bodies, our narratives, our lives. The way that we’re fetishised, the preoccupation that people have with surgery and what is (or isn’t) between our legs, the cisnormative ideals of beauty or handsomeness or acceptability that are imposed on us.

It’s hard enough to ever feel good enough as a woman. But as a trans woman? Forget about it. That’s a whole whack of extra baggage on top of what is already a pretty extensive compendium of societal BS. 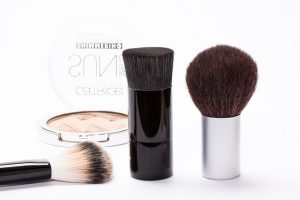 Now, I’ve mentioned before that, for the most part, I’m pretty typically femme-presenting. Because that’s a space and a kind of expression that I find fits me – it feels natural, it feels comfortable, and it’s a space that I claim for myself. So I often wear makeup, and dresses, and “cute” shoes and all that jazz. In the past couple of months, however, I’ve actually been wearing less and less makeup – which is great, for a couple of different reasons. It makes it a lot faster for me to get ready in the mornings, because all I need is some BB cream with SPF, a quick tightline, and a swipe of mascara and I’m good to go. I mean, don’t get me wrong, I can still gussy up when the occasion demands it, but – and this is the real reason that less is more (at least in this instance) – I don’t feel like I need to cover up as much.

It’s a product of a couple of factors. Yeah, laser hair removal has done wonders for me. There’s much less that needs to be hidden now. And, as time has passed, my confidence has grown. I don’t need to put on warpaint for every single encounter I have with the world. And the truth is, that at least for me, makeup really is like warpaint. Or armour, even. I don’t hide behind it, but it’s something that can bolster my confidence and make me feel indestructible when I really need to. Big business meeting? Job interview? Major television event? Yeah, I’m gonna prepare for combat.

But in my day to day life, it just isn’t necessary anymore. And that’s a good marker of my own growth and progress.

I spoke a little last week about “passing” and all the complexity bundled up in that. And that ties in to this discussion, because I’m afforded certain liberties on the basis that I do pass. Let me give you an example – think of a girl who shuns makeup, wears boyish clothes, crops her hair short. She’s a tomboy, right? Well, only if she’s cis. Because if she’s trans, then people start saying things to her like, “Well, why did you transition if you’re just going to dress and act like a boy anyway?”

That’s a pretty messed up double standard, don’t you think?

So let’s step back. I said that I’m pretty comfortable with a femme-leaning expression. And I am, for totally intrinsic reasons. But, that happens to be kinda convenient, because I’m also presenting in a way that cisciety is comfortable with. But, nowadays, I’m not as reliant on the way I present as a means of self-defence. And sometimes, I also get tired of getting read as straight, being that I’m thoroughly lesbian (femme invisibility in the queer community is something that I’m not about to talk about right now, but you can read about it).

For me to experiment with an expression that’s a little less femme… well, there’s a lot of insecurity that I have to tackle there.

In this past week, a trans woman for whom I have the greatest respect posted a video on social media of her shaving. Something that she still has hang-ups about.

In this past week, another trans woman for whom I have the greatest respect posted a picture of herself wearing a tank-top. Something that she still has hang-ups about.

In this past week, a fair number of trans people whom I don’t know, but who I follow on Instagram, posted their “before and after” pictures.

In this past week, a whole bunch of trans people in my circles started talking about their insecurities – over their bodies, or their voices, or their fears over not being able to live up to the cisnormative standards imposed on us by society.

But there’s still a bunch for me to be insecure over. And, trust me, I am. My breasts are still way too small. My arms, though they have shrunk, still feel far too bulky. Sometimes I just find myself sitting and running my fingers back and forth over my thyroid cartilage, sighing as I do.

Seeing my trans siblings come out about their insecurities, and seeing them overcome them – seeing them embrace the uniqueness of their identities and their bodies – has been pretty darn inspirational.

And, I’ve been stepping out of my own comfort zone too. Finding my dyke mode which, even if it isn’t a very natural space for me to occupy, is still fun to play around with on occasion. It’s nice to know that it’s something that’s inside my range, because that knowledge gives me agency. And it’s liberating, because it’s a reassurance that I am still me, regardless of what I’m wearing. 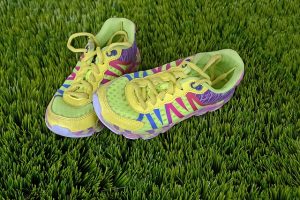 It doesn’t stop there, either. It’s no secret that I’ve been working out a lot lately. And generally trying to eat better (which is difficult, because food and I have a complicated relationship, which I’ll discuss some other time). Part of the reason for that has been that exercise is a coping mechanism for me, and endorphins are real. But also part of it is that I’m trying to treat this body right. Trying to love her better.

I told you about the bulky arms. The reason they’re bulky? Back when I was in high school, I tried to compensate for what-I-didn’t-know-at-the-time-was-dysphoria-but-really-it-was with weight-lifting. A lot of weight-lifting. I worked hard at it, because that’s just what I do. And so those arms grew. It’s been more than a decade since I did any resistance training. They’re not as bulky as they used to be – and they have shrunk even further since I started HRT – but they still look pretty big, at least to me.

It took me the longest time to get to the point that I felt I could go out in public wearing a sleeveless top. And, because summers in South Africa are freaking hot, that was a problem, not just in terms of self-image, but for thermodynamic reasons as well.

And when I finally did? I was really self-conscious about them. In fact, people even asked me a couple of times about how much I worked out.

Yeah, that was awkward. When you have this deep-seated insecurity, and you take a leap of faith about it, and then someone pokes you. RIGHT THERE.

I haven’t got any remarks about my guns in a few months, though they still look pretty buff to me.

So much so that this week, after one of my workouts, I took a photograph of myself flexing, to post to social media.

I still have hang-ups about them. Probably, I still will for a while to come. But, like my trans siblings, I’m acknowledging it. Talking about it. Reclaiming it. Refusing to shame myself, refusing to hate myself.

Instead, I’m giving out free tickets to the gun show. Knock yourselves out.

Sun’s out, guns out. Because I’m tired of hating on my body, and girls can be muscley too. And also, skorts are awesome. #girlslikeus #fuckdysphoria #transisbeautiful #queerfitnessza #twoticketstothegunshow 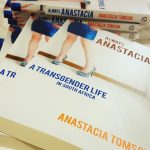